The first round of the Buddy Ferreira Classic always provides thrills as teams try to cement themselves into the Super 8 while competing in such a prestigious tournament. Lets take a look what happened in the first round:

Game 1: Through the first period there was no score between Hingham and Arlington Catholic, but it was obvious that Hingham was the better team as they had 13 shots in the first period compared to 3 for AC. Entering the second period, Hingham kept pouring it on as they got on the board first with a goal from a net-mouth scramble of bodies and the goal was credited to Trevor O’Brien. Joe Sullivan followed this up by scoring a beautiful goal that ringed the cross-bar before hitting the back of the net. Hingham then pushed the lead to 3-0 before the period ended by captain Will Kenney converting on a shorthanded 2 on 1. The third was mostly the same as the other periods as Hingham controlled play. Trevor Lally made 44 saves in net for Arlington Catholic as Hingham held on for a 3-0 victory.

Game 2: Duxbury and Archbishop Williams had a lot of promise with a meeting with Hingham up for grabs in the second round. The first period was tightly contested as Archies was playing physical. This physicality lead to a 5 minute major penalty for a hit to the head that tilted the ice towards Archies net for the final minutes of the first. The second period Duxbury found their grove and started to push the pace of the game. Fresh off of an unsuccessful powerplay, Duxbury found the back of the net from a high slot tip by Zack Stewart. The score remained the same heading into the third period. The start of the third period saw an offensive explosion by Archbishop Williams as they tried to even up the score. They failed to do so and Stewart added the empty netter from his own blue-line to put the game away while he got his second of the game. Duxbury won by a final score of 2-0 and move on to play Hingham in the second round.

Game 3: Reading and Austin Prep began action for the lower part of the bracket in a game that had no clear favorite at puck drop. The first was a scoreless period, but Reading showed that they are a tough and physical team that is going to be a tough out no matter if they play in the Super 8 or state tournament. Both teams added one goal in the second period as they were knotted at 1 heading for the third period. The third period was back and forth the entire way as neither team deserved to lose. The game looked like it was headed for overtime, but then Michael Tobin found himself behind the defense with 6 seconds left. Before he could get the shot off, Prep defenders swarmed him resulting in Tobin losing his balance and the puck. No call. Overtime it was. Both teams had glimmers of hope in overtime until Doug Russo buried one home in front of the net to send Austin Prep to the second round.

Game 4: The final game was a matchup between Falmouth and top ranked BC High. The Eagles are the favorite, by most, to win it all in the tournament. They came out strong with a goal from Thomas Kramer in the first period. The Eagles never looked back as they added three more goals before the game was over coming off the sticks of Joseph Kramer, CJ Martin and Chris Romaine. Connor Flavin recorded the shutout in net.

Second Round Matchups:
Hingham vs Duxbury Monday @ 5
BC High vs Austin Prep Monday @ 7 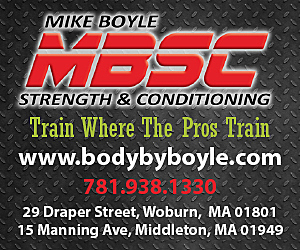